In this work, artificial neural network (ANN) was utilized to develop a new model for the prediction of the kinematic viscosity of petroleum fractions. This model was generated as a function of temperature (T), normal boiling point temperature (Tb), and specific gravity (S). In order to develop the new model, different architectures of feed-forward type were examined. Finally, the optimum structure with three hidden layers was selected. The optimum structure had five, four, and two neurons in the first, second, and third layers respectively. To prevent over-fitting problem, 70% of the experimental data were used to train and validate the new model and the remaining data which did not participate in learning process was utilized to test the ability of the new model for the prediction of the kinematic viscosity of petroleum fractions. The results showed that the predicted/calculated and experimental data are in good agreement. The average absolute relative deviation (AARD) of the new model was 1.3%. Finally, the results were compared with an Eyring-based model (Soltani et al.’s work); it was shown that, based on the reported results by the authors, the accuracy of both model were in the same order. 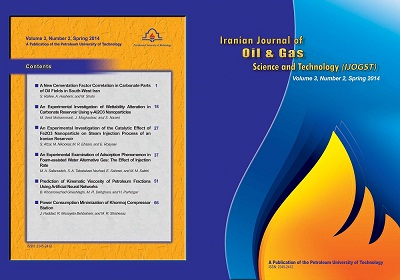